the water, get out repairs but not fix it

phone Apple icon appears, the phone will not enter the progress bar interface, computers and other

end appeared a long time before 4013, open the shield demolished the entire board after found that

the water is not serious, the baseband signal no part of the water signs, so start from 4013

and then brush again, see if you can enter a progress bar, but the result remains the same, then think

of failure as in the past a little bad 4Swifi cause failure, so the wifi is also removed, there is wifi sealant,

has been out repair, welding power supply section is blown over, it is estimated to blow A8cpu Weld,

the final decision demolition A8

removed, uneven temperature, can easily lead to the motherboard and cpu break! No pictures here,

such as the need to learn in addition to plastic and demolition cpu method, see my IPhone5 replanting

A6 CPU and detailed with FIG.

Installed, do not rush to dress the upper layer, the first folder to see the power supply current, normal,

connected to the computer with a hard disk, most need to enter DFU mode only available on-line, on-line

OK, and then loaded the top! 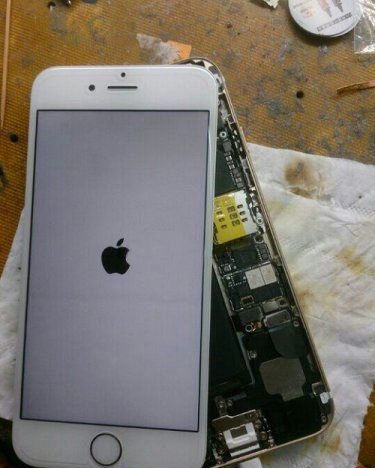